ILLUMINATING ATOMS EXHIBITION, FOR THE INTERNATIONAL YEAR OF CRYSTALLOGRAPHY 2014 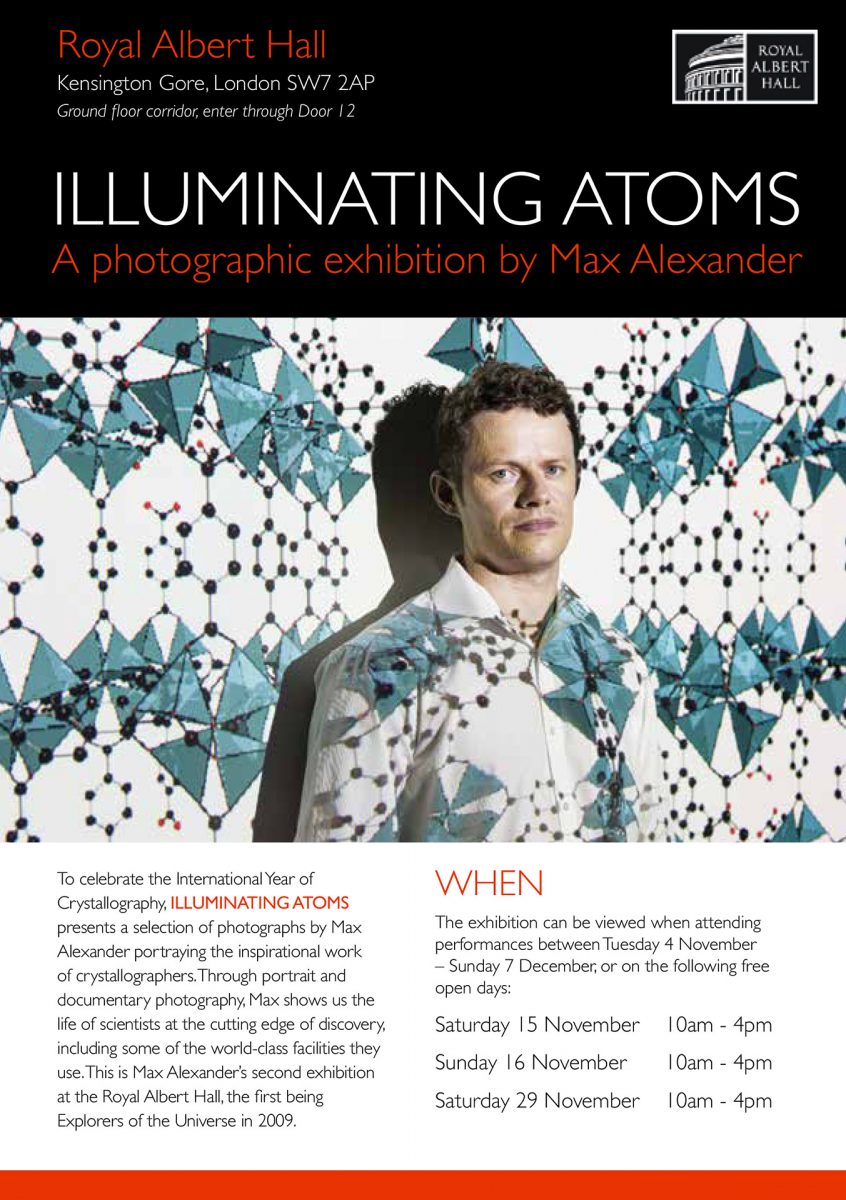 My Illuminating Atoms exhibition, for STFC and other sponsors, for the International Year of Astronomy 2014, first shown at the Royal Albert Hall in London and on tour around the UK.

To celebrate the International Year of Crystallography, ILLUMINATING ATOMS presents a selection of photographs by Max Alexander portraying the inspirational work of crystallographers. Through portrait and documentary photography, Max shows us the life of scientists at the cutting edge of discovery, including some of the world-class facilities they use. This is Max Alexander’s second exhibition at the Royal Albert Hall, the first being Explorers of the Universe in 2009.

STFC is proud to sponsor the Illuminating Atoms exhibit along with co-sponsors The Diamond Light Source Ltd, the Wellcome Trust, GlaxoSmithKline (GSK), Astra Zeneca and Pharmorphix.

The exhibition can be viewed when attending performances between Tuesday 4 November – Sunday 7 December, or on the following free open days:

Crystallography reveals the atomic structure of materials, from minerals to magnets to viruses, and it underpins many of the biggest scientific discoveries of the past 100 years, including the chemical structures of antibiotics and DNA.

By exposing a crystal to a beam of X-rays, neutrons or electrons, it is possible to obtain the characteristic ‘diffraction’ pattern of a material and work out where the atoms are located inside the crystal. The technique of X-ray crystallography was first established in 1913 by William and Lawrence Bragg, a father and son team who were awarded the 1915 Nobel Prize for Physics for their work.

UK crystallographers have always led the world in chemical, physical and biological sciences, with significant contributions in studies of disease, catalysts, batteries and climate change. Women scientists are also strongly represented with Rosalind Franklin and Dorothy Hodgkin amongst many successful British female crystallographers.

As part of the exhibition we are also presenting a talk and Q&A, How Crystallography Changed the World on Sunday 9 November.